You don’t know what a bearded dragon is? Well, if you are interested in reptiles and you 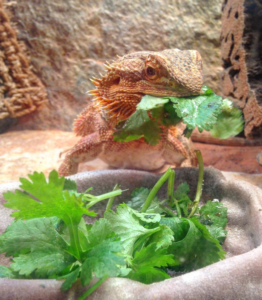 like every kind of animal, you should read this article because it’s about the cutest and the weirdest pets that you have ever heard about. As I mentioned bearded dragons are reptiles and their Latin name is Pogona. Let me tell you some general knowledge about them.

Their behaviour is quite an interesting and amusing one. You should know that you can make pogonas angry but not easily. For most of the time they are calm. That’s why they are great pets, they like it if you stroke them. They are angry if you provocate them like hurting them. How do you know if they are angry with you? 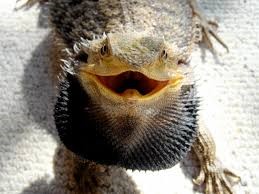 Simple. Just look at their neck. There is a beard like thing which is big and black if they are angry.

But they are funny every time you are around the terrarium. They watch you and sometimes follow you and when they are outside their terrarium they run or just sleep on the floor, bed o 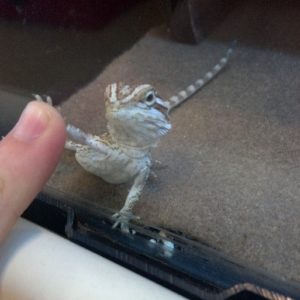 r even on you.

Some people say that they are afraid of bearded dragons. I can understand if a little kid says that but an adult? They are little and they don’t bite because they haven’t got any teeth.

You may ask how I know this much about these lizards. To tell the truth I have one. And this obsession of mine with bearded dragons has got a funny story, which started about 4 years ago. 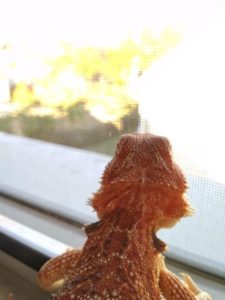 I was 10 years old and I attended a zoo camp in Debrecen. There was a programme when we had to touch reptiles like snakes and bearded dragons. I didn’t know what they were so I said: ‘Let me see one of those bearded things’. And when I saw it I, fell in love with it. I touched it and stroke it and wow! It was just amazing for a 10-year-old girl. A few weeks later I mentioned it to my parents and surprisingly they agreed. We went in the nearby pet shop and there were bearded dragons. I was very happy. But then they showed me their food, which were alive. And I walked out of the shop. Three years passed and I was sad because of what happened. Then we went to a cat exhibition where they sold cats and showed really rare ones to people saying ‘Look how beautiful they are’. The only problem was that they cost more than your house. And there was a reptile exhibition, too. I went there and there it was. 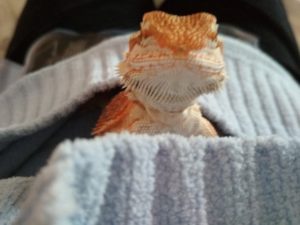 The cute little bearded dragon looking at me with puppy eyes and I couldn’t resist touching it. When we got home I did a research about them and we went to the same pet shop again. 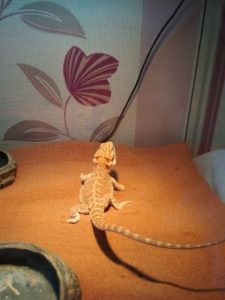 Then I talked to my parents about it again. But later my mother said no because she did not know who would feed the animal. So I was sad and I can’t express how sad I was that time. And now the final part. It was a month ago when my grandmother asked about my 14th birthday present. And jokingly I said: a bearded dragon. But I didn’t know that it will happen finally. I thought it was just a dream that would never come true, but fortunately I was wrong. A week later one of my mother’s workmate said that there was a bearded dragon that had to find an owner rapidly because the woman who 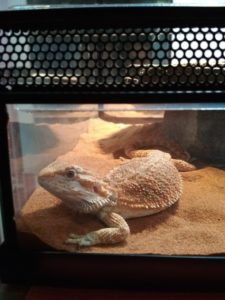 was her original owner has a son who is afraid of her. And my mother said that we would take her home. And she was my birthday present. 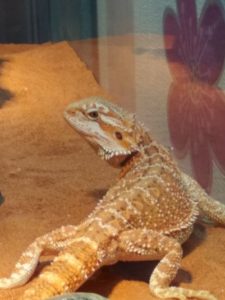 My bearded dragon, Lui is a little less than one year old. She is 33cm long and almost 100g. She is the cutest thing I have ever seen. She eats twice a day and I bathe her 3 times a week. Yes, I bathe her because she has to be clean and hydrated. 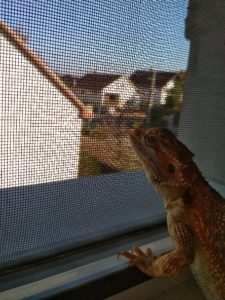 And I just noticed that she recognizes my voice and I was so happy about that. When I was crying because I was stressed, she took a look at me and then started running. When she suddenly stopped to look at me again I started to laugh at her. Both of us calmed down and went to sleep.

Basically what I am saying all about these reptiles is that they are great pets and if you have one and you need advice, you can turn to me.

(A képeket a cikk szerzője készítette.)